The secret ingredient to tailgating Success

What you actually need to host the ultimate Tailgate

There’s just something different about tailgating before the whiteout game. As Nittany Nation increases in size and anticipation grows for the game against The Ohio State University, fans from all across the country make their way to Happy Valley in support of the undefeated Nittany Lions.

The last time Ohio State traveled to Beaver Stadium was in 2016 for the annual whiteout game. Penn State’s Marcus Allen blocked a late Buckeye field goal attempt and Grant Haley returned it 60 yards for the game-winning touchdown. That game became a stepping stone for success in James Franklin’s coaching tenure, and breathed life to a fan base who had been starving for a big win.

During last year’s whiteout game against Michigan, Beaver Stadium overflowed with 110,832 Nittany Lions - the most fans in Penn State history. With the whiteout game only a few days away, Coach Franklin is hoping for a turnout similar to last year. 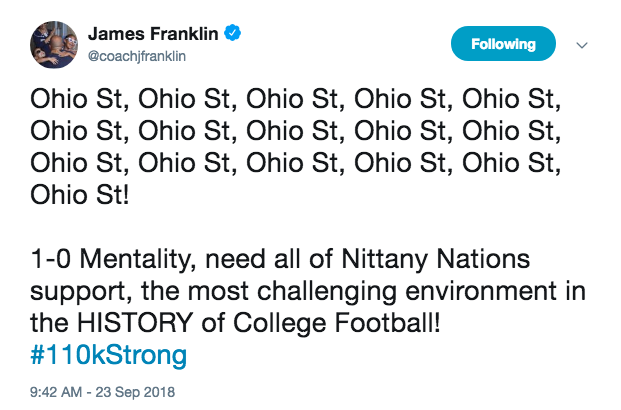 There’s no questioning the loyalty and energy in a Penn State fan, but when the Nittany Lions host Ohio State for a whiteout game, the intensity and Penn State spirit becomes contagious and reverberates across the valley. For those travelling to Happy Valley for the first time, a tailgate is the best way to get the full Penn State experience.

Before entering the stadium, fans will have a full day outside the stadium playing music, grilling food, and enjoying the traditions that make tailgating in Happy Valley an event in itself.

That event isn’t about mouth-watering food, the thousands of RVs or the dozens of yard games to play. What makes a Penn State tailgate fun and welcoming? It is that it doesn’t matter who you are, because when you’re in Happy Valley, you’re a Penn State fan above all else.

Nittany Nation electrifies the air around Beaver Stadium. For up to twelve hours before the 7:30 p.m. kickoff, Penn State fans will have a full day of games such as Kan Jam and Stump to entertain them. If throwing a hammer in the air and smashing a nail on a stump doesn’t sound fun (or safe), Happy Valley has other options.

While some fans may want to relax in their lawn chairs and watch pregame coverage, others may want to challenge their neighboring tailgaters to a friendly game of cornhole, or maybe just enjoy the company of friends and family. Regardless of how your time is spent tailgating, when you finally enter Beaver Stadium, you become more than just a fan or Penn State enthusiast – you inherit the century-long expectations to be the loudest, most passionate fan base in the country.

Home
Back to Top